The Common Mode Speaker Line Filter (JPB-2016) is used to eliminate undesirable heterodyne tones caused by capacitive coupling of multiple Class D power amplifier outputs. Heterodyning is the combination of two or more frequencies to create sum and difference tones, in this case within the audible range. Heterodyne tones can occur when output cables from more than one Class D amplifier are run close together over a long distance, even with no audio signal present. Ashly Class-D amplifiers currently include all nX, NE two-channel, NE multi-channel, Pema, SRA, and TRA models. The JPB-2016 is wired using Neutrik® speak-ON NL-2 or NL-4 type connectors. 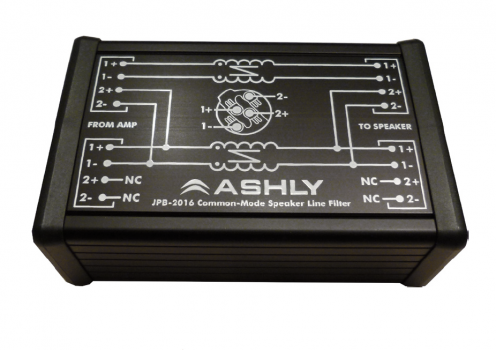 The carrier signals on each output channel of an individual multi-channel Class-D amplifier are typically synchronized, or frequency “locked” to a single common carrier frequency (300 KHz). Therefore heterodyning between multiple channels of the same physical amplifier cannot occur. NOTE: The heterodyning mechanism is actually created by similar, but not exactly the same high-frequency carrier signals feeding back into the outputs of each respective amplifier. Those signals then interact inside the Class-D amplifier output stage which will then generate the heterodyne tones. i.e. If one amplifier running a 300 MHz carrier leaks into the output of another amplifier running at 309 MHz, the amplifiers can multiply those two signals together creating both sum and difference tones, with the difference tone being only 9 KHz, which is within the range of hearing. (Sounding a little like an old AM radio.)

The JPB-2016 common-mode speaker line filter rejects high-frequency signals coming back into the power amplifier output, not the reverse. Because both + & – speaker lines are acting as antennas, and the 300 MHz carriers capacitively couple equally into both sides of the speaker line, one good way to reject an incoming high-frequency carrier is to place a common-mode filter at the output which will have virtually no effect on the differential-mode signal traveling from the amplifier to the speaker, but will block common-mode interference coming back into the amplifier.

Because different “Model Series”, and brands of amplifiers will most likely operate at different carrier frequencies, at least greater than 20 KHz apart, the difference tones that high cannot be heard. The heterodyne tone problem is most often observed when running multiple individual amplifiers of the same exact model series, and then running their speaker lines closely together within the same conduit or wire bundle for long-distance runs which will increase the capacitive crosstalk coupling between the speaker lines.

This is because running the speaker wires close together creates a capacitor. The longer the run the higher the capacitive coupling from one line to another, and thereby one amp to another. This effect has been observed with closely bundled speaker lines running distances as short as 75 feet but more typically occurs at lengths of 200 feet or more. NOTE: In all but the shortest speaker lines, separate Class-D amplifiers should NEVER share a common multi-core speaker cable. Multi-core speaker wire will maximize high-frequency crosstalk (i.e. at 300 MHz) as distance increases, potentially exacerbating the problem of heterodyning between the amplifiers. Multi-core speaker wire will work perfectly fine in the audio range, and will not create the potential for heterodyning when wired from a single Class-D multi-channel amp (2, 4, 8, channels etc), however using multi-core speaker wire with separate Class-D amplifiers where the carrier frequencies may not be synchronized greatly increases the risk of heterodyne tones.

Another simple technique when routing long speaker lines from separate Class-D amplifiers is to leave some physical distance (2″ to 3″ minimum) between each bundle run that is tied to each separate amplifier as shown below.

©2017 Ashly Audio, Inc. All rights reserved worldwide. Ashly Audio is a division of Jam Industries, Ltd. All features, specifications, and graphical representations are subject to change or improvement without notice.

This website uses cookies to improve your experience while you navigate through the website. Out of these cookies, the cookies that are categorized as necessary are stored on your browser as they are essential for the working of basic functionalities of the website. We also use third-party cookies that help us analyze and understand how you use this website. These cookies will be stored in your browser only with your consent. You also have the option to opt-out of these cookies. But opting out of some of these cookies may have an effect on your browsing experience.
Necessary Always Enabled
Necessary cookies are absolutely essential for the website to function properly. This category only includes cookies that ensures basic functionalities and security features of the website. These cookies do not store any personal information.
Non-necessary
Any cookies that may not be particularly necessary for the website to function and is used specifically to collect user personal data via analytics, ads, other embedded contents are termed as non-necessary cookies. It is mandatory to procure user consent prior to running these cookies on your website.
SAVE & ACCEPT
Go to Top